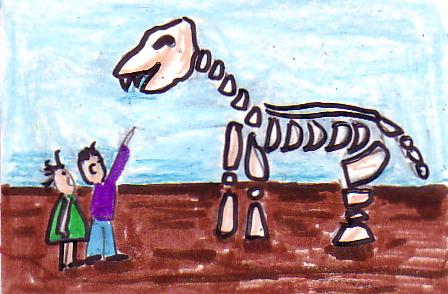 The book starts off in a museum. In this museum there are lots of dinosaur fossil skeletons. Then it explains how they got all those fossils into the museum. Also, it tells about the living dinosaurs millions of years ago. It tells about some ways scientists think dinosaurs became extinct and how the bones ended up in the ground. It told how the fossils were formed. Next, it told about people who find the fossils. It has a lot of facts about dinosaurs and fossils.

I liked the book a lot because it tells all about different kinds of dinosaurs. It also tells about fossil hunters. I learned a lot of new words and facts about dinosaurs and fossils by reading this book.

I think that anybody who likes to read about dinosaurs or fossils would like this book. Also kids who just like to learn about new things would enjoy it too.