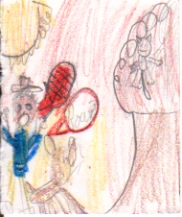 Jay Barry Lee went down to the bottoms to look for the family's cow. His Ma doesn't like him down there, but he needs to find the cow. Old Rowdy, his dog, treed something. Jay Barry came closer to the tree. Something was staring at him from the tree. The thing was a monkey! He asked his Grandpa about the monkey. He said the monkey belonged to a circus. He said that there was 28 more monkeys. They escaped from a terrible train accident, but some were not so lucky. The monkeys were scared. They ran until they came to the Cherokee bottoms! The owners put up a reward. Twenty-eight monkeys were $2 a piece and one was worth $100!

His Grandpa had made some traps. All it needed was some apples for the bait. Jay Barry had plenty of those. Jay Barry and Old Rowdy set up the traps. They waited for the monkeys to come. They hid behind a tree.

Suddenly a monkey came out of the tree. He was going for the traps! A loud "SCREECH!" rang through the bottoms. A bulking figure with short, stubby legs, long arms, and a long tail burst out of the tree! Would this monkey save the smaller monkeys? Read this hilarious, fun filled book to find out.

I liked this book by Wilson Rawls. His description made me feel like I was there. I like how he described Jay Barry trying to cook. The beans overflowed, the potatoes steamed, and the gravy was sticky.

My favorite part was when the monkeys got Jay Barry and Old Rowdy drunk. The two monkey hunters set off for the monkeys, with a new idea. They find the monkeys at a whiskey still, drinking the sour mash. The monkeys made them drink it. They got drunk. They took off Rowdy's britches. It made me laugh so hard, I cried.

This book is not like any other book I've read. It has a lot of humor, adventure, and is funny. It's not like books with epic battles and sad parts. It's more cheerful book.

I felt like this book was unpredictable. It made me wonder about what would happen next. I wondered if Jay Berry would get his 22-rifle and his pony.

I recommend this book because it has comedy, adventure, tough choices, and leave-you-on-the-edge-of-your-seat moments. How can catching monkeys be so funny?

I recommend this book to people who love annoying and embarrassing sisters, mischievous monkeys, and adventurous characters.