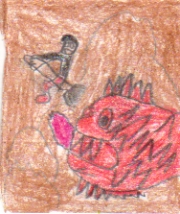 Harry Potter is almost finished with his training at Hogwarts. Harry wants to get away from the terrible Dursleys. He gets a letter from Mrs.Weasly saying that they have tickets for the World Cup and she asks if he can go. Ron sends Harry a letter asking if the Dursleys say you can go. Send us the answer as soon as possible. We will pick you up on Sunday at 5:00. If they say "no," we will still pick you up on Sunday at 5:00. Mr.Weasly, Fred, George, and Ron picked him up. Fred drops a piece of candy that turns out to be a Ton-tongue toffee. Dudley eats it. His tongue grew a foot, then two, then three feet long. Then,at his second favorite place in the world, the Borrow, Harry meets Bill and Charlie. They ate yummy food. They talked about Harry's uncle. He sees the World Cup--an amazing game. Ireland wins the World Cup. Then the most terrible thing you could ever see happened--The Dark Mark. The dark mark is shown above the forest trees. That means that someone has just been killed in there. Harry goes back to Hogwarts where a competion was held. It included two other schools and three tasks that are highly dangerous. People have died in the past. Harry had to put all of the training he has learned and some new magic to the test. He was in grave danger. To find out what happens to Harry in his fourth year at Hogwarts read this book.

I think the book is about Harry handling the tasks and how he faces up to danger. It also tells about his friendships at Hogwarts.

My favorite part is when Harry does the third task and runs into the big light. Harry steps in it. Then his world is up-side-down. He doesn't know if he should step forward or if he should stay still and send up red sparks so that they can rescue him.

This book is part of a series. This book is like all of the other books. It's about Harry getting his training as a wizard. It's different because all of the books have different stories and different spells, charms, curses, jinx, hexes, and potions.

In this story Hermione reminds me of my sister Rachel because of her brilliance and of her hair color.

I recommend this book for people around the fourth grade.It is difficult if you don't understand the things in the beginning. The rest of the book is based on these facts.