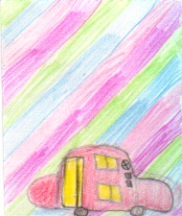 Stanley went to Camp Green Lake because he stole some really expensive and important shoes that every one was looking for. He had to go to court and was given a choice to go to Camp Green Lake or jail. He decided to go to the camp. When he got there he was given his room and was told he had to wake up at 4:00 A.M. He ate breakfast at 4:30 A.M. He had to dig one hole every day. It had to be six feet long and six feet wide. He dug his first hole and said it was really hard. He got a lot of blisters. His hands started to bleed. He put his cap around the shovel so his hands wouldn't rub on the shovel so much. There were lots of other kids there too. They always stayed in a room to talk after their hole was finished. Stanley said his first hole was really hard. Stanley was told the second hole was much harder because you were already in pain. Where they stay is kind of like a desert. The dirt's really hard. It used to be a town where there were people and a big pond. Then all the water dried up and it became Camp Green Lake. There are lots of snakes there. If you get bit by a yellow spotted lizard you're most likely bound to die. Stanley got used to digging a hole every day. His friend Zero ran away. Every one thought he was dead, so the people who ran the place shut down all his records. One day Stanley stole the water truck to look for Zero. He started it up with a little help from a new kid . He ran the truck right into a hole. He fell out of the truck and ran as fast as he could.

When he was walking he saw a boat stick out of the dirt. He heard a voice inside. It was Zero. He was drinking something called sploosh. Stanley was thirsty, so Zero let him drink some. Stanley said it wasn't bad.

There was a curse. It was about his no-good-dirty- rotten-pig-stealing great great grandfather. There was refuge on God's thumb. No body really knew what it meant except that it had to do with a generation of Yelnats.

Then he climbed a mountain with Zero. It had a thumb at the tip top, so they climbed and climbed. If you want to find out what Stanley and Zero do next read the book HOLES.

I liked this book because of the characters--especially Stanley and Zero. I liked how they ran away from camp, and how they drank something they never heard of or tasted before.

My favorite part was when Stanley took the truck and ran into a hole, He seemed to be dizzy when he ran away. That was my favorite part because he stole a truck without knowing how to drive one.

I found Stanley's friend Zero interesting because he had secrets ,and he was very sneaky. I like how he snuck food and water to stay alive. When I read this book I didn't know what would happen next. I like to have surprises in books. I like predicting what will happen next.

I recommend this book for all ages. It's a bunch of fun to read. If you like books that our full of adventure and that have some miracles you would like the book HOLES.