Arthur and the Comet Crisis

Arthur and the Comet Crisis 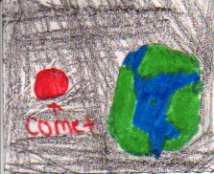 One day at school Arthur sat by his friend named Fern. Fern said "How are you doing?" Arthur mumbled. At the Sugar Bowl, Buster was there. He said he saw a UFO. Now one believed him. There was a lot of them he said with different lights. He was in bed when it happened. Buster's friends said that UFOs don't exist. But Buster wanted to prove it. He asked Muff for a telescope. It was very heavy. They pulled it up a rope to the tree house. They put it together when they got the tree house. Buster look through it. Buster said that Mr. Hany has purple pajamas. Arthur told him look at the sky. Arthur left. Then Buster found all these things in the sky. He thought they were UFOs. Then he asked the Brain about the different things he saw in the sky. Brain got tired of Buster always asking him. So he gave him a book. Then he saw something through the telescope. Then he looked it up in the book. Was a comet going to hit the earth? He was scared. Then he told every body in school. No one believed him. But it bothered everybody so much that Brain help him. They all came to the tree house. Brain looked at it and said it is going to hit the earth. They were scared. Fern found a piece to the telescope. To find out if it was going to hit the earth, you have to read the book.

My favorite part in the book is when Buster looks through the telescope and sees Mr. Hany in his pajamas. He says, "Look at Mr. Hany. He has purple pajamas." I like that part because it is very funny. This book is part of a series about Arthur. It is different from the other books in the series because it is talking about a comet. One of my favorite characters is Buster because he likes UFOs. He did not give up trying to look for UFOs. Another character I like is the Brain because he is very smart and he helped Buster. I felt good when I read this book because I thought about what was going to happen next. Buster had a lot of funny things happen to him. He almost had me believing in UFOs.