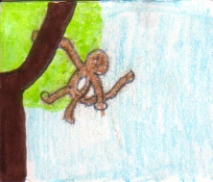 Jay Berry lived in Oklahoma with his mom, dad, his sister, Daisy and his dog, Rowdy. Daisy was a cripple. Her leg was bent up and she could not walk on it. Her dad made her a crutch. Their Grandpa owned a store. Jay liked going there because he always got a sack full of candy. He had a Grandma too.

One day Jay Berry and Rowdy were walking in the Cherokee bottoms when they heard a squawking sound. They followed it to an oak tree and looked up. They saw a bunch of monkeys. Where Jay Berry lived there were no monkeys. He couldn't believe his eyes. Jay Berry ran to his Grandpa's store. His Grandpa told him that a circus car broke down, and all the monkeys ran into the Cherokee bottoms. Grandpa said there was a reward for catching the monkeys--two dollars for the small monkeys, and one hundred dollars for the special monkey. That was tons of money in the old days.

Jay Berry's dream was to own a pony and a 22 gun. So his plan was to buy them with his reward money. Jay asks his grandpa for advice on how to catch the monkeys. First they made traps and put apples in them. They hid them in the underbrush by the oak tree were he had seen the monkeys. But that did not work.They tried a net in a hole and a ton of other stuff.

If you want to find out if Jay Berry caught the monkeys and how and if he got his pony and 22 gun, you absolutely need to read this book.

I really liked this book because it told what our life would be like if we lived back then. Jay Berry went to town and went to the library. He had fun catching the monkeys.

I found Jimbo, the big monkey, one of the most interesting characters. He is always up to no good and he does amazing things, like somersaults and laughing and jumping from branch to branch.

I felt very good when I read this book because Daisy was having fun even with her bad leg. Jay Berry had lots of fun, also. I laughed a lot to. At the end I felt happy because Jay Berry helped Daisy.

I recommend this book for fourth grade and up. It was a thick book and had a couple of hard words. I really think you will enjoy this book like I did. It will have you laughing out loud.