Goosebumps - The Phantom of the Auditorium

Goosebumps - The Phantom of the Auditorium 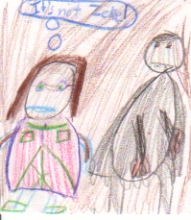 Brooke and Zeke have both been given big roles in the school play, "The Phantom". Nobody has ever done the real play in front of an audience. Zeke got the part of the Phantom. Zeke loves scaring the other cast members with his gross costume.

Before they start rehearsing, their teacher, Mrs. Walker, tells them an old and scary legend from when the school first opened, almost seventy-five years ago. There was a boy that found a script in his basement. That script was "The Phantom." He brought it to school and they put on the play. It was the night of the play. Everybody was nervous and anxious. The boy who was supposed to play the part of the Phantom was missing. They searched for an hour. He still could not be found. The teacher was about to cancel the play, but before she could speak. A terrible scream rang through the auditorium!

What had happened? Brooke and Zeke's first rehearsal went well. Then Mrs. Walker went back stage to clean up. The cast members were all giving each other high - fives when suddenly Mrs. Walker screamed from behind the curtain! Brooke, Zeke, and two kids named Corey and Tina ran behind the stage. They saw that Mrs. Walker had completely disappeared! To find out what happens next read the book, Phantom of the Auditorium.

I really liked when scary things started to happen--the message appearing on a piece of scenery, and a stage light came crashing down. As I was reading, I kept wondering if there really was a phantom--especially when Zeke and Brooke went through the trapdoor to do some exploring. I felt like I was going down the trap door with them. It was really scary. My favorite part was when Brooke, Zeke, and Brian found a homeless person living beneath the auditorium I thought for sure this person was the Phantom and the story was over. I was surprised!!

This book is part of the "Goosebumps" sesries written by R.L. Stine. I love his books because they are always scary.