Hair in the Air - Spencer's Adventures

Hair in the Air - Spencer's Adventures 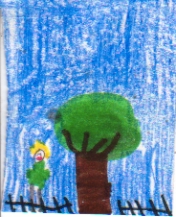 Spencer was a trouble maker. He wanted to go fishing with his grandpa. His grandpa had to go to work. Spencer had to stay at his grandpa's house. The cat went in to his grandpa's bed room. Spencer went into his grandpa's bedroom and saw Grandpa's toupee. Spencer played a game with it. Spencer threw it in the air. It got stuck in the tree. Spencer went to get it . He hung the toupee in the neighbor's tree. The neighbor was scared because she thought it was a tarantula. She called for help. Spencer got the toupee. Grandma was working in the flower bed. She saw the toupee in Spencer hand. She thought it was a rat. Grandma told him to bury it. Spencer did. Later he dug it back up. He washed the toupee. It turned white and the hair stuck up. Then Grandma saw it. She said you have to tell Grandpa the the truth. To find out what Grandpa does read the book.

My favorite part was when his grandpa burned the hot-dogs and then he threw the other hot-dogs on the grill to stop the fire. I like that part because it is funny when the neighbor called the fire department. It has a lot of interesting parts in it. It has good pictures. There are parts that when you read you don't want to stop. I liked this book a Iot. It made me think about what Grandpa was going to do next. I found a lot of the chapters funny. They all had good parts. My favorite of all was when the toupee went into the tree. It was good because he had to climb the tree and the cat came up. Spencer is not that bad. He just doesn't think before he acts.

I recommend this book to everyone. Everyone would like the funny things that Spencer does and the trouble he gets into. My mom liked the book. She is glad that I am not like Spencer. I am too.