The Girl Who Cried Monster

The Girl Who Cried Monster 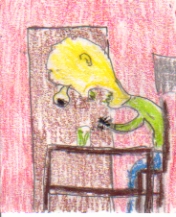 Do you like monsters? A girl named Lucy loves to tell monster stories that scare her little brother Randy. One day she went down to the library and to get a book. When she was walking home, she remembered that she left her rollerblades in the library. When she went back, Mr. Mortman, the librarian, was in his office. He was a monster. Monster Mortman was eating crickets. Lucy went home and read her book. The next day she went to the library. She returned the book and she picked out a book without looking at it. Mr. Mortman said, "What a great book,'How to Fix Your Own TV'". Lucy headed for the door, opened it and let it slam shut. When Mr. Mortman went to his office, she followed him. He turned into a monster. He got out the jar of crickets and one of his tarantulas. He said, "Dinner time, my timid friend," and ate the tarantula. Lucy took a picture of Mr. Mortman. Mr. Mortman chased Lucy to the door and Lucy was free. Lucy's Mom and Dad got the picture developed. Mr. Mortman was at the place where they got the picture developed. Lucy's Mom and Dad invited him for dinner. To find out what happens next, read "The Girl Who Cried Monster".

I like "The Girl Who Cried Monster" beacuse it has monsters in it. It also has Mr. Mortman, the monster eating crickets, and a tarantula. There are scary parts too. I like how it ends.

My favorite part is when Lucy picked out a book without looking at it. It is funny because Mr. Mortman said "What an interesting choice" and Lucy said, "I heard it was a good book." My favorite character is Mr. Mortman because he turned into a monster. I don't know how that happened.

I recommend this book to 2nd to 4th graders who like monster stories. They will enjoy the scary parts as much as I did.