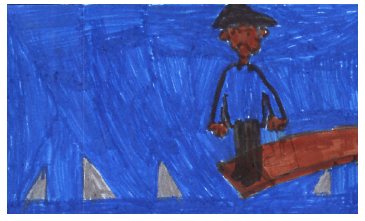 Ellray Jakes, the main character, is taking care of the class fish over spring break. His little sister keeps begging and begging to feed the fish and he finally says yes. The next morning, when Ellray goes to feed the fish, it is floating at the top of the tank. Ellray’s little sister is brushing her teeth and Ellray starts to yell at her. Ellray’s mom comes into the room and asks how the fish died. Ellray’s little sister said she felt bad for the fish, gave him a party, gave him too much food, and over fed him. After Ellray’s little sister finished explaining how the fish died, Ellray‘s mom called his teacher and told her what happened. The next week, when Ellray was walking up the steps to school, a girl in his class who wanted to be a marine biologist asks where the fish is. Ellray says that Mrs.Sanchez will make an announcement. People keep asking what happened to the fish, and Ellray says he was feeding the fish and the cap of the fish food container came off and all the food came out. A girl says she has an aquarium at home and the fish food cap does not come off that easy. Read to find out if Ellray keeps lying and what happens at the end.

Ellray Jakes Walks the Plank is a good book. The problem is interesting. The problem is that Ellray is taking care of the class fish and his little sister keeps begging and begging to feed the fish. Ellray finally says yes. The next morning, the fish is floating at the top of the tank. The pictures are pretty good. The illustrator used a lot of details in the pictures. For example, when Ellray was on his Game Boy and his little sister was playing with her dolls, the picture showed all the stuff the dolls came with instead of just showing the dolls. The story is very realistic. The problem could actually happen because you could actually be taking care of your class fish and your little sister might over feed it.

I would recommend this book to third and fourth graders who like books with a lot of problems. The story teaches kids that telling the truth is better than making stuff up. Readers can relate to this story because they might have a class pet to take care of and something might happen to it. If you think you will like this book go out and get it!