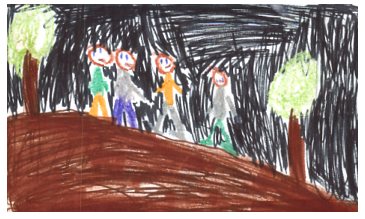 In Werewolves Don’t Go To Summer Camp, the Bailey School Kids are at summer camp and they are scared! They think that the camp counselor, Mr. Jenkins, is a werewolf. They have to see if he is one. In the beginning, the Bailey School Kids want to see if Mr. Jenkins is a werewolf. When Eddie, one of the kids, wants to sleep outside, he was sure werewolves were not real. But just when he heard something, he quickly changed his mind and so did the other kids. They figured out a way to turn him into a human. Read to find out the rest.

I think Werewolves Don’t Go To Summer Camp is a great book!!! It was cool when they snuck into Mr. Jenkin’s cabin. It was locked so they had to figure out a way to get in. The illustrations looked so cool! When they were on a hike the picture was AWESOME!!! The book is funny and worrying at the same time. Once, one of the kids thought a spider was fake, but it was real and jumped on Eddie.

I would recommend this book to people who like werewolves. People who go to summer camp will also enjoy this book. So if you’re bored pick up this book and READ!!!