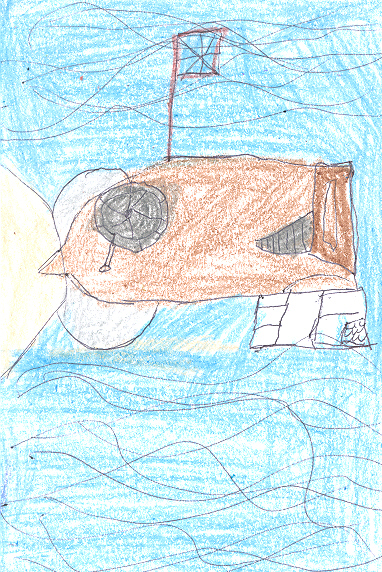 The family in the story was on a vacation and they just wanted to go cruising on the boat names Lucky Star. Before they knew it, the ship hit a coral reef, a big rock. The dad tried to get out the life raft so they could sail back to their home. That didn’t happen, because Captain Dexter and first mate Joe hopped into the life raft and it drifted away, leaving the kids behind, on the boat that was very torn up and stuck. Luckily nearby was an island. They crashed into the island, which was part of the reef, so they just walked off of the boat and onto the island. While they were on the island, they did many things. They climbed up trees so they could get to a high distance. They did it, because they wanted to start a fire so it would be a flare for airplanes to see that there was someone on the island. After a while, they noticed no one was coming and they went to explore the island. A little while later, they noticed that they were starting to get thirsty and hungry. To solve the problem, they went back onto the boat and tried to find some food and water. Luckily, they found food, but there was no water on the boat. Carter and Jane went to go find water on the island. After many hours of searching, they finally found a body of water. They tried to fill up their jugs and got swept away by a strong current, Carter then Jane. Since Jane was a fast swimmer and a very strong swimmer, she tried to swim her way back to the sandy shore, but it was no use. The current was so strong, it pulled her back even more. Finally they got to the shallow end and walked back up onto the shore. This books continues with more twists and turns as they try to find their way off of the island.

My favorite part is when they try to get rescued with a good idea. To try and get rescued, they lit a fire and were trying to call their mom to make her call the Rangers so they could come and find them and take them home. I liked this book because it was full of suspense. There were so many things that happened to them during the story that made you wonder if they would survive like when they had to jump off the boat and had to get back onto the island after trying to escape. Finally, I think the kids in the story were just like me. We all work hard if we have to do something important.

In this book, Stranded, four kids had to learn how to live on an island with no water and no food, except the food they found on the boat. If they would have never have gone cruising that day, they would never have to find water, or go through caves. I recommend this book to any adult or kid who likes adventure!