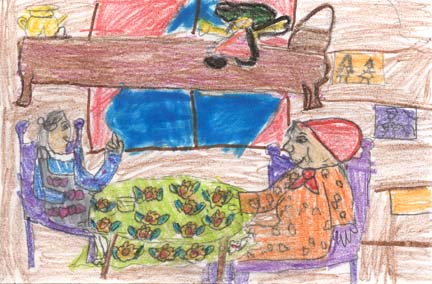 In this story Natasha never knew how to be patient. One day Natasha's Babushka [grandma] gave a doll to Natasha. While Babushka went to the store, the doll came to life! The doll started bossing Natasha around. For example, the doll told her to play with her, run with her and take her places. The doll told Natasha that she wanted to eat so Natasha gave her food and the doll started making a mess! Natasha had to wash the doll's clothes and even had to iron them for her! Natasha started crying because she felt annoyed and tired. Babushka came back and Natasha gave the doll back to her. Natasha learned her lesson because the doll was acting just like her so she knew how Babushka felt. Now, Natasha waits patiently and treats others the way she wants to be treated.

Our favorite part is when Natasha learns her lesson and learns how to be patient.

In Esma's opinion Natasha didn't have to do what the doll said. Esma's favorite character in the story is Babushka because she has a way of giving Natasha a taste of her own medicine.

Marieme thinks this book might be interesting to other children who are like Natasha. Maybe they could change if they read it. Mariem's favorite character is Babushka because she knows how to do many things. She is very clever.

In Janaye's opinion, this book is good for smaller children because it teaches you not to be selfish, and not to treat others how you wouldn't want to be treated. Janaye's favorite character is Babushka because she teaches Natasha a lesson by giving her a doll that started bossing her around