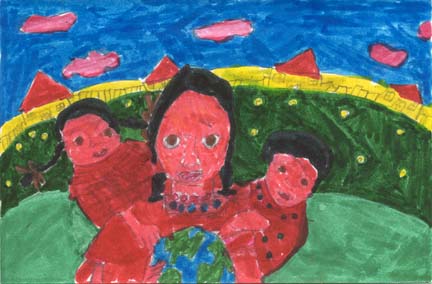 This book reminds Alice of the Important Book, because they both talk about the special things in the world, and how things and humans are unique. Alice's favorite part is when they said our hearts are just the same because it describes how people are the same. When Alice read this book she felt good because it told her a lot of things about nice people.

This book reminds Hoa of her first day at school in Viet Nam when some boy was being selfish and mean to her. When my teacher found out she said to the boy that he should not be mean and selfish. After that they stopped being mean and selfish to me. When I read this book I felt badly for people who were not being accepted and were embarrassed because their friends didn't even know they are just the same. This book also reminds her of the book Going Some Place Special because it talks about being kind, respecting others and not being mean.

Christopher likes this book because he agrees that people have the same feelings no matter who they are. My favorite part is when they were laughing, because it doesn't matter how we are on the outside, it matters how we are inside. When I read the book I felt happy because the book talks about good things.

We recommend this book to people who are nice because it talks about the nice things about people and not people who embarrass others because of their differences.