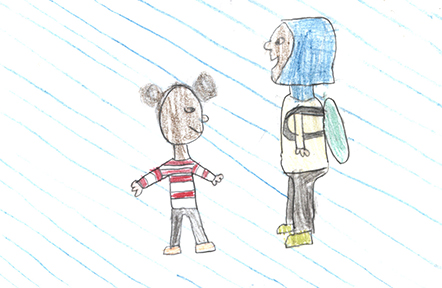 This book is about two sisters who go to school on the first day and the older sister is wearing a hijab. They are excited to go to school. A girl asks the little sister what her older sister is wearing on her head. At first, she whispers “A scarf” but then she says it louder, “A scarf. A hijab”. Later she goes up to her sister and asks her how she’s doing. She was fine. Then a boy laughed at the sister. She doesn’t do anything. She walks away. She doesn’t care about what he thinks. She feels proud that she wears a hijab.

We like this book because we learned about other people’s religions. One favorite part is when the little sister draws a picture of her and her sister having a picnic on an island wearing their blue hijabs because it’s a beautiful picture.

A lesson you can learn from this book is we should celebrate our differences.

We recommend this book to kids who are interested in learning about other people’s religion. Also, Muslim people would like the book because it’s about wearing a hijab.

Ryan A. and Jack P.
are students in
Westport Book Club