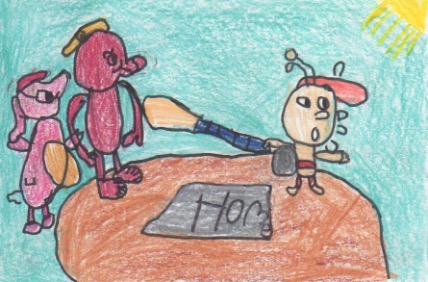 A snail hits the ball to the moon. When snail hits the ball, he tips his hat at first base. Snail is tired. Then Hippo yelled, “Fast!” Then the ball hit the moon at second base. Snail is thirsty. The ball goes back. At third base, snail is sleepy. The ball bounces. At home plate, snail races. The ball goes back. The fielder sees the ball. The fielder throws the ball. Hippo shouts, “slide!” Snail slides. Boom! Did the snail get a medal? Find out what happens next.

I liked Hooray for Snail because it is a funny book. My favorite part of the book was when Snail went to sleep in the middle of the game. I like the illustrations because they were detailed. I also like this book because you learn two lessons. One is you cannot give up. The other lesson is to believe in yourself that you can do something.

Brooke F.
is a student in
Pam's and Elissa's 2nd Grade Class