Henry and Mudge and the Bedtime Thumps

Henry and Mudge and the Bedtime Thumps 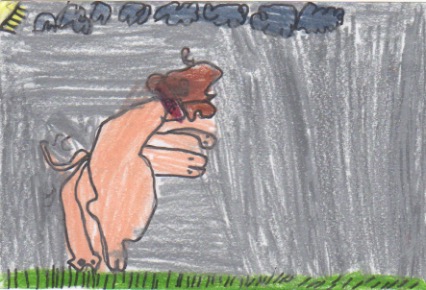 A boy named Henry and a dog named Mudge went to their grandma’s house. When Mudge saw Henry’s grandmother, he ran to her and started to lick Henry’s grandmother’s dress. Henry was scared that Mudge would have to sleep outside in the dark. Henry and Mudge were afraid they might see scary animals like a bear or a giant moth or a bobcat or a mouse. Henry begged his dad for Mudge to not sleep in the dark country yard. But his dad kept on saying no. Mudge has to sleep outside. Mudge can’t sleep in your bed because he will drool. Henry was afraid Mudge would be lonely and sad. Mudge gave Henry a tight, tight hug. They both went to bed. They both had trouble sleeping. They both heard the…BEDTIME THUMPS!!!

My favorite part was when Mudge jumps on Henry’s grandmother and likes her dress because it reminds me of when I always jump on my brother. When Mudge jumped on the table and knocked over the peppermints, he almost knocked over Henry’s dad’s coffee! I think this book is a 7 on a scale from 1 – 10 because it is interesting, but not the most interesting book I’ve ever read. I learned that you should NEVER fight with your dad. I also learned that if your dog must sleep alone in a country yard, not to be that worried because you’re going to see your dog in the morning. I think Henry’s dad could be a little nicer when he said for Mudge to go outside. Instead of screaming at Mudge, he could say it in a nice voice like, “Mudge, can you please go outside because you knocked down a bowl of peppermints and almost knocked down all of the hot coffee.” Henry should not have whined to his dad because whining isn’t the best thing to do to your father.

Eli G.
is a student in
Pam and Carly's 2nd Grade Class