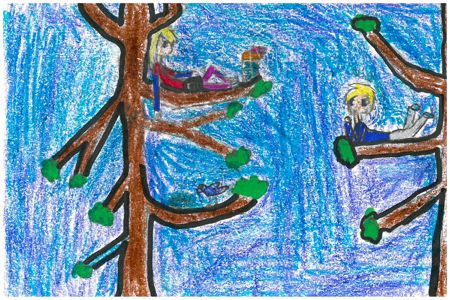 WHOA! WEIRDEST SUMMER EVER! 13 year old Mary Lou Finny thought her summer was going to be a total nightmare when her teacher told her class to write a journal. She didn’t know what she was going to do until her uncle came and all sorts of crazy, interesting, and exciting drama started happening. During the summer, she experiences her first romance. (She gets a boyfriend!) She gets so involved writing in her journal that at the end of the summer, she completes SIX journals.

My favorite part was when Mary Lou was at her uncle’s house in West Virginia. It was a barn in the middle of a field with 13 people living in the house. They had no electricity or plumbing so they had to pee in an outhouse, or what is called a “pee bucket” that lay under their beds. They took a bath once a week and talked very strangely. I don’t want to spoil anymore of this well-written book so I won’t. I actually experienced a little of this book, too. Over the summer my mom told me to write in a journal but I only wrote in two whole ones. I thought this book was written with passion and enthusiasm. When I finished the book, it became my favorite book. I kind of felt that I was the girl who was writing because I write like her and I enjoyed reading it. I didn’t like one part. It was when Mary Lou was at Carl Ray’s house and his family was throwing pranks on her. I felt bad when they were doing that because she didn’t deserve it. I didn’t like Mary Lou’s best friend because she was annoying and talked about her boyfriend all the time.

Have you ever read “Dork Diaries”? If you have, then this book is similar but doesn’t have any drawings. I recommend this book for 5th to 7th graders because I think it might be a little hard for a 3rd or 4th grader to read.