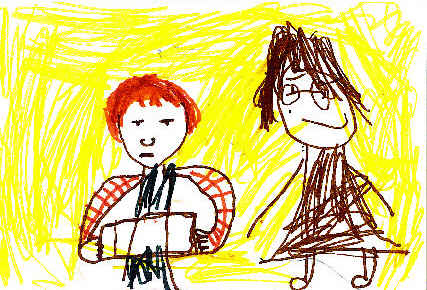 This book is called Alexander and the Terrible, Horrible, No Good, Very Bad Day, by Judith Viorst. This book is about Alexander and he has a bad day. Like when he left his sweater in the sink while the water was running and like when he did not get a toy in his cereal like Anthony and Nick did. Also when he got a cavity and his brothers did not. It felt like a bad day but it might be a good day tomorrow.

I felt like I had a bad day like Alexander when I dropped my sweater in some place that was wet. That made me have a really bad day too. I thought it was really funny when Alexander showed his picture of an invisible castle and his friend had a really good picture of a boat. It was funny because Alexander just had a blank piece of paper and he said it was a picture.

Jack C.
is a student in
Elaine and Ana's 3rd Grade Class