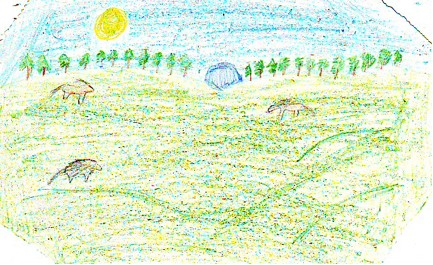 This story is a pleasant fairy tale about sharing and being nice. Once there was this little horse named Mumkin, he didn’t like to share. He lived in a meadow on an island. He didn’t have any friends, because he was very bossy. There are some lessons about sharing, being nice to your friends, and sharing with them. It took a change of heart for Mumkin to learn to be a good friend.

If you want to read a book that has a good moral to the story, this is one for you. I think Mumkin was the most interesting character. He was rude at the beginning, because he wouldn't share. Then he learned his lesson. This book is unlike any other book I've read. When I first read the story, it was weird and unkind, but later on it turned into a nice ending. The story reminds me of my life. When I was six, I was mean, and now I've learned to be nice.

I think anyone who wants to learn how to be a good friend should read this book. If you like sharing, and books about how to be kind and sweet to others, this book's for you.