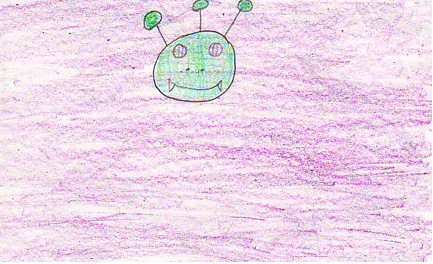 The book is about a man named Kistler, and he told people how to draw pictures in his book the pictures were people in outer space, it was about this one alien that jumps on little people and there were a lot of aliens eating people. That alien that jumps on people dies. A person shot him, and that is how he dies.

I really like this book because it teaches you how to draw some pictures. I like the biggest character best because he was the strongest. The big character also changed during the book. He started out mean and now he's nice. There are illustrations in this book, with the illustrator using a lot of black because it takes place in outer space. This book is part of a series. If you liked this book, and like to learn how to draw monsters and aliens, you can check out the other three books in the series.

I highly recommend this book to people who like to draw, because it shows you how to draw different characters. It also has lots of action, and fighting so if you like action books you'll like it too.