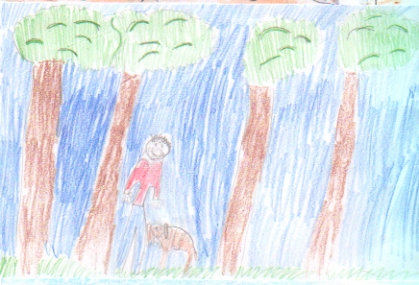 Shiloh is about a boy named Marty. One day he found a dog in his yard and named it Shiloh. He found out that it was Judd Travers's dog. Marty knew that Judd didn’t take good care of his dogs. So he kept him and hid him on their hill. He needed food for him that night, so he got him some squash that they had for supper. Judd came over and asked Marty’s dad if he could go hunting on his hill, where Marty was keeping Shiloh. Marty’s dad said it was too dangerous. Marty was so glad his dad said that. One day he saw Judd shooting a deer out of season. Marty made a deal with him. He wouldn’t tell the police if Judd would give him Shiloh. Read this book and see if Marty gets to have Shiloh.

I thought Shiloh was a good book because it’s about a dog. I like dogs. I have a dog named Lady. This book has surprises. When Shiloh got attacked by a German Shepherd, I thought that was quite a surprise.not knowing that was going to happen. My favorite part is when Marty has to work for Judd so he gets to have Shiloh. I liked it because even though the work was hard, he never gave up. He wanted to get Shiloh. I thought that Marty was an interesting character because he tries everything to get Shiloh. He never gives up. He was a very nice and caring person. I thought this book was unique because it is sad in some parts and sweet in others. When Shiloh got hurt by the German Shepherd, it was sad. It was sweet because Marty cared about Shiloh and never gave up to get him.

I recommend this book to children that are in second grade and up. This book is by Phyllis Reynolds. She writes many books about Shiloh. I also recommend it to people who like dogs.