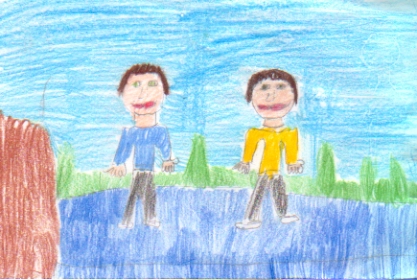 In the book On My Honor Joel and Tony asked Tony’s dad if they could ride their bikes to the park. Tony’s dad said only if they went straight to the park. The boys took off with their bikes. Tony was scared to go to the park because it was too far out, so they went to the Vermillion River. Tony decided to stop on the Vermillion River Bridge. He was looking over the bridge and decided to go swimming in the dirty river water.

Even though Joel knew better than to go, Tony made fun out of him until he went into the water. Tony bet Joel he couldn’t swim to the sand bar that was about 100 feet from where they were standing. As they were swimming Tony realized Joel couldn’t really swim. When Tony got to the sand bar he turned around and realized Joel was gone. He thought that Joel was hiding in the bushes, or that he headed up to the State Park. Read the book to find out what happened to Tony and Joel.

This book teaches a lesson. You should listen to your parents and not go somewhere without them knowing. We shouldn’t let peer pressure make you do something you know is not right. Joel knew better than to go in the water. Tony laughed at him. Joel didn’t want to be laughed at, so he went in.

I felt sad for Tony because he lost his best friend. He didn’t know how to go back to Joel’s parents and tell them what had happened to Joel. He felt sad because he should have gone to the state park. Sometimes I wish that I could go back and undo something I did. But it can’t be done.

The story reminds me of my uncle’s car accident and how hard it was on his family to hear the news. It’s not easy loosing a family member. I know that it had to be hard on Joel’s family to hear of his accident.

I recommend this book because it is good and easy to follow. It would be a good book for 4th to 6th grade. It will interest readers and get involved in the story. It is a story that could happen to them.

Amber B.
is a student in
Sr. Janet's 4th Grade Class