Ricky Ricotta's Giant Robot vs. The Mutant Mosquitoes from Mercury

Ricky Ricotta's Giant Robot vs. The Mutant Mosquitoes from Mercury 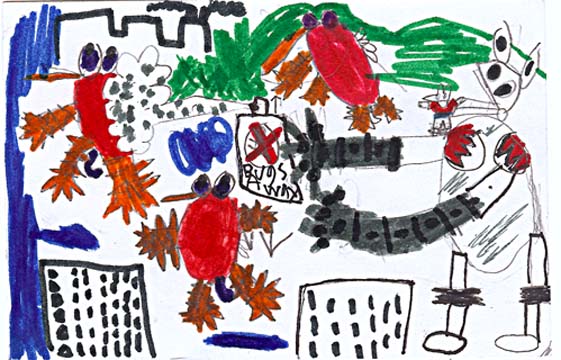 Do you want to read a series about a mouse and a mighty robot? Well then try Ricky Ricotta’s Mighty Robot. Here you go, in Ricky Ricotta’s Mighty Robot vs. the Mutant Mosquitoes from Mercury. The book is about two friends saving the day. Mr. Mosquito hates his planet Mercury because of the long, hot days, and the long cold nights. The temperature in the night dropped to over 300 degrees below zero! Mr. Mosquito decides to take over earth, so Ricky Ricotta and his mighty robot have to fight back! You’ll find out who wins in the book I’m reviewing, only if you read it! Plus this book comes with Flip-O-Rammas. It has ten pages of the big battle in Flip-O-Ramma.

I think you should read Ricky Ricotta’s Mighty Robot vs. The Mutant Mosquitoes From Mercury because it’s very funny and amusing. I know every boy in the world would like to read it. It also comes with flip-o-rammas. A flip-o-ramma is something where you flip the pages and it looks like one character is moving. You can see Ricky’s mighty robot kicking or punching the mutant mosquito. Every one who reads this book should do the flip-o-ramma thing!

I recommend this book to people who like super hero books and evil animals from space, trying to take over the world. I bet you fifty dollars, your favorite part is going to be the flip-o-rammas! I still recommend that families throughout the world, even in Asia, Africa, Europe and Russia, would like to read the book I’m reviewing!

Jamie B.
is a student in
Lisa's 2nd Grade Class