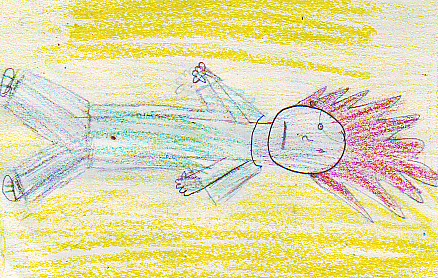 At the beginning of Bead Head a boy named Oliver had a bad hair day. His hair was flying everywhere. Up, down, all around. So his mother, sister, and dad had opinions to help him fix it. His sister's idea was curling it. His father's idea was to pull it. His mother's idea was to wet it. They all agreed and it worked. Until it went BOOM! So they put some gel on it and that worked, until it went BOOM again. So he just wore a hat. When he got to school it was picture day. He took the hat off and nothing happened until the camera man said 1,2,3 and can you guess what happened? You'll have to read it to find out.

I like Bedhead because it made me get an imagination in my head. I love hair! The part that really popped out was at the end when his hair went BOOM! I think I liked Emily, his sister, the best because she suggests the curling idea. She reminds me of when I was a little girl playing with hair. I think Oliver learned a lesson. Always know when it's picture day. The illustrator made a lot of good colors choices in the book. The most special part of the book is that Oliver's family loved him enough to pitch in and help him.

I highly recommend this book. It made me think about life differently. I think Bed Head is an all age book. It might interest teachers too. I really recommend it for anyone who has ever had a bad hair day.