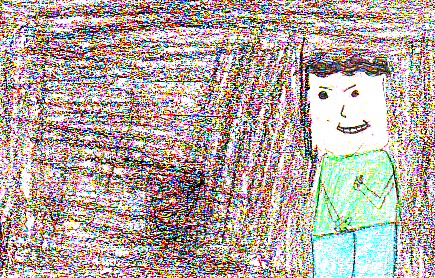 Beahead is based on a boy named Oliver. Oliver woke up with this weird looking, swirling, coughed up, fur ball hair. Fortunately, Oliver's mom, dad, and little sister were there to help him with his hairy situation. Oliver's mom tried to put water on his hair, but it dried up. Oliver's dad tried clipping his hair with clothespins. Then his dad sprayed his hair, but it didn't work. Finally, they found a way to keep his hair down, a baseball cap. When Oliver got to school he realized it was picture day. No hats. Everybody got ready to take the class picture when the photographer told him to take off his hat. He took it off slowly and nothing happened at all. Click! The photographer took the picture and you'll never believe what happened. You'll have to read it to find out.

I liked Bedhead because it makes me laugh so hard, that I'm lucky as gold. First Oliver was sleepy and had a nappy head. Then he was embarrassed at school. Now that was my favorite part of all. We've all had embarrassing moments at school before. This book reminds me of another book, Armadillo Tattletale, because they are booth funny and both have colorful pictures. This book reminds me of my sister when she wakes up and she's grumpy and has nappy hair. The funniest part of the book was when Oliver's dad clipped his hair with the clothespin to keep it from going everywhere and then it popped out. That thing could hit someone in the nose, cheek or the mouth! It was so funny. I would give this book an award.

I think people should read this book if you like things that are hilarious. It words like BOING and ARRG! It's a page turner.