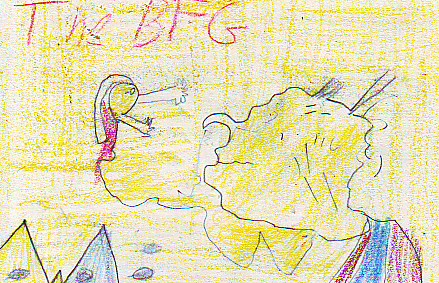 One night Sophie could not sleep because she had a nightmare. Then all of a sudden The BFG reached his hand in Sophie's window and snatched Sophie. He took her to giant country. Next, a nasty giant came and said, "Who are you talking to?" Then they headed to England to tell the Queen about the nasty, mean giants. Meanwhile, the BFG took Sophie, the head of the airforce, and the head of the army to put the mean giants of a diet of nasty snozzcumbers for the rest of their long-legged lives. Read the book and find out what happened next.

I think that this story is hysterical. The language is made up and unusual. My favorite character is the BFG because he has courage to write a book even though writing was hard for him. Now that's pretty amazing! You know, most chapter books do not have illustrations. The illustrations in The BFG were only in black and white, but they helped me understand the story. You will never believe it, but I actually got to see the play of The BFG in my hometown.

Now you see what I?m talking about. I highly recommend this book for third grade and up. If you enjoy books about giants, check it out. It teaches you a lesson.