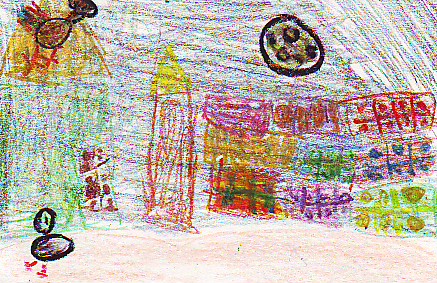 In a brand-new chicken coop, there were ten tiny chicks that had just broken out of their eggs. The farmers? wife hoped one would be a rooster. Everyday they grew a little more. Soon they changed from fluffy little chicks to bigger chicks to hens, except for one. The young rooster was full of pride. The farmer?s wife hoped he had the gift. The hens and rooster had no idea what the gift was. That night the young rooster found himself on top of the chicken coop. He crowed ?cot cot cot cot ca-toodle toooooo!? Then the sun came up. The hens and rooster were convinced that raising the sun with his voice was his gift. He began each day like this and Smallest Hen was up every morning to watch him. One day the sun came up before Rooster crowed. He and his friend Small Hen discovered that this probably wasn?t his gift. They have to figure out what his gift is and why it is important.

I think this book is kind of funny, especially the part when his sisters are all yelling at him because he got on top of the chicken coop and said, ?cot cot cot co co ca-toodle toooooooo!? The young rooster is my favorite character because he thought he could do magic my making the sun rise with his crow. The book makes me think about somebody?s farm.

I think people who live on a farm or ranch might like this book because of the hens and the rooster. If you are wondering what the gift is you have to read it yourself.