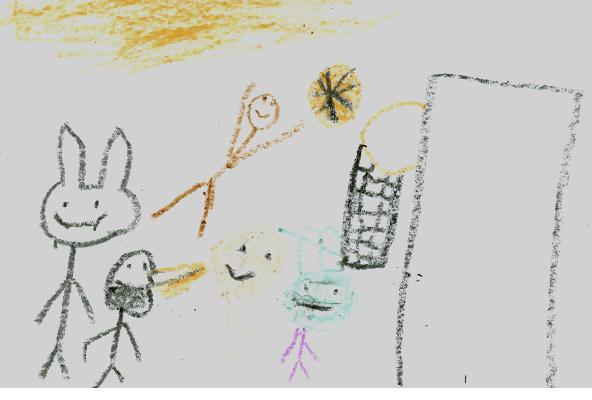 The Nerdlucks started to exercise so they could hold a basketball and play the game. The Nerdlucks also took more talent from the basket ball players and started to get stronger and bigger. Now they were Monstars. The Looney Tunes were scared! Bugs Bunny told the other Looney Tunes that they needed some help. They saw that Michael Jordan still had his talent. Meanwhile, Michael Jordan was playing golf. Bugs Bunny pulled Michael into Looney Tunes land and told him that they needed his help. But Michael said that he's not a basketball player anymore, he plays baseball. The Monstars squashed Michael into a basketball and that made him very angry. He said, "Let's play basketball!"

The big game started and the Looney Tunes were losing. Michael's friend Stan hid in the Monstars locker room and found out their secret that they stole talent from NBA players. The Looney Tunes wanted to give up but Bugs gave them secret stuff and it made them stronger. But it was only water. It worked because they believed in themselves.

The Looney Tunes started winning. Mr. Swackhammer gave them a challenge. He said if the Looney Tunes won they could stay in their land but if the Monstars won Michael and the Looney Tunes had to work for him. There was only 10 more seconds left to the game and Michael used cartoon power and threw the ball in the hoop and won the game.

I would recommend this book to my brother and my friends because it's funny. They would laugh. The would like the parts when the basketball game starts and when Michael and the Looney Tunes win the game. They would think the pictures are cool.