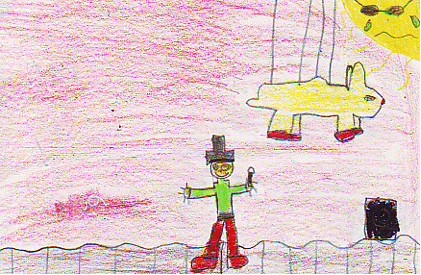 If you like mixed stories, you should read One Dark and Dreadful Night. It is about a narrator called Maestro Von Haunty who wants to present three terror tales, but a poor little kid names Lilly messes them up. Instead of having tales of terror, she makes them happy tales. In each tale, Lilly is mischievous and changes the sets and the characters to make them not so terrifying. It angers and annoys Maestro Von Haunty to have this child mess up his tales.

I think the book is funny. It has a lot of funny parts like when she made a giant rabbit come down the beanstalk. My favorite part is the first part because the girl changes the set like crazy. The book is so cool because it describes stuff that happens! I want to read it over and over again.

Jason B.
is a student in
Mrs. Friedrichs' 4th Grade Class