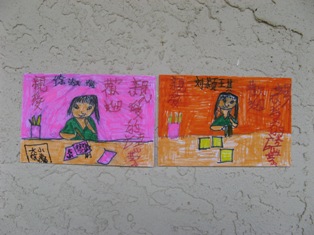 Mei Mei hated speaking English. She wouldn't speak English and she only wanted to speak Chinese. Mei Mei thought about all these things after she found out she was moving from Hong Kong to New York. She didn't understand English but she really understood Chinese. The story gets good after Mei Mei met a new teacher at the beach. Things started to change. She even started teaching math to little children because she only needed to know numbers and not English. Find out what Mei Mei did at the end of this story!

Kelly X.: I liked this book. It was awesome! I think Mei-Mei and Ms. Nancy, her teacher, were very interesting characters. I think Mei-Mei was interesting because she sat in class and would not listen but other students were raising their hands. She had a lot of personality. She also changed at the end of the story but we already told you, you'll have to read the book to find out how. Mei-Mei makes me think of myself when I first came to Sacramento. I would not speak in English and I only spoke in Chinese! I think Ms. Nancy is an interesting character because she because she helped Mei-Mei speak in English.

Ying Qi. L.: I really enjoyed reading this book because the girl in the story, Mei-Mei was from Hong Kong. When she arrived in New York from Hong Kong, she did not want to go to school there but she loved her school in Hong Kong. She learned how to do math in Hong Kong so I think it was a special thing that Mei-Mei helped the little children with their math. She could help them because she also did math in Chinese. I will probably do the same thing one day because I like to help little kids too. I felt happy because of the way the story ended but I can't tell you why because I don't want to spoil it for you. You will probably feel happy too.

Kelly X.: I would like you to read this book, "I Hate English." I want you to read it because it was very good. It reminded me of someone else who moved to another country and only spoke their own language. I think young readers would like this book because it has pictures in it. I liked the pictures because Mei-Mei looked very mad. I think you will like it too. You might really want to read this book too because it was very interesting because Mei-Mei would only speak Chinese but not English.

Ying Qi. L.: I would like for people to read this book because it is a very good book that talks about people from other countries. It is also very easy to read so little children would probably like to read it too. The interesting part of this book was when Mei-Mei made funny faces at Ms. Nancy and I didn't even care. She was so mad at that teacher. Why does she have to speak in English anyway? She likes Chinese!