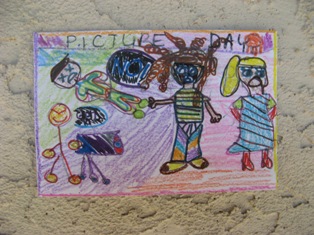 What if you had a bad hair day on Picture Day? Well, let me tell you about a story called, "Bedhead." The story is about a boy named Oliver, the main character. He is having a big, huge problem. Oliver is having a bad hair day --and it's Picture Day! He was so worried about his hair. So, his mom, dad and sister tried to help him fix it. They tried so many things but nothing worked! Was Oliver going to solve the problem? Well, since his parents and sister couldn't help him, he put a cap on his head and it almost worked. While Oliver took his picture on Picture Day, something very funny happened. You would not want what happened to Oliver, to happen to you. So, remember, "Fix your hair before Picture Day" and read Bedhead to find out the whole story!!

I liked this book because it was full of entertaining action and it was funny. Oliver is also an interesting character. The part that was funny was when Oliver used a brush for his hair and it got stuck. My favorite part was when Oliver took his picture and suddenly "B-B-B-Boing! "B-B-B-Bunk!" Oliver's hair was going crazy and it was everywhere! Yikes! Poor Oliver, his hair wasn't even fixed on Picture Day. My favorite character is Oliver because he panicked every time his sister, mom and dad tried to fix his hair. His situation also didn't get solved.

I would like to tell kids about this story because I want to get kids to read and learn. This story is hilarious, funny, adventurous and full of surprises. It is also written with happiness. For example, in "Bedhead," Oliver's hair was uncontrollable! His hair was so crazy that on Picture Day, it hit everyone that sat behind him. It is a very entertaining story for kids who love to read. I also think you would like this story is you are young.

Mai F.
is a student in
Mrs. Abram's Reading Club