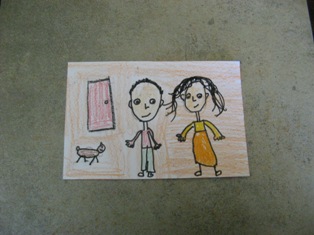 Bedhead is about a boy that wakes up and goes to the bathroom to get ready for school. But when he looks in the mirror, he sees himself and he also sees he's having a bad hair day! So, he tries to fix his hair but he can't. He starts making a bunch of noise in the bathroom and his parents hear it. Oliver's parents and sister went into the bathroom. They tried to help Oliver with his hair. They fixed it for a little while but it didn't last long...after he got to school, he found out it was Picture Day. Right before his turn to take the picture, his hair got messed up again! How bad do you think it was? Read the book to find out...

I would tell people about this book because it is a great book. It is also the funniest book I have ever read. One reason it's funny is because the kid had a bad hair day on [a] Picture Day. My favorite part was when Oliver's parents and his sister came and tried to help him make his hair look good. But, nothing worked! I was thinking that this was really happening.

My sister is a reader that wants to read the story because she heard about the part when Oliver's family tried to fix his hair and how it was such a mess. I felt like I was sleepy because good stories make me sleepy. This book is good for bedtime stories. My brother is a reader that would also like to read "Bedhead" because he would be laughing real hard, especially when Oliver's hair went out of control. But a couple of minutes later, I think he would fall asleep too. I think my cousin would like to read the book too because of the part when Oliver woke up and saw himself in the mirror and freaked out. This book would be interesting to grownups and teenagers and little kids too because everyone has bad hair days.

Nicolas V.
is a student in
Mrs. Abram's Reading Club