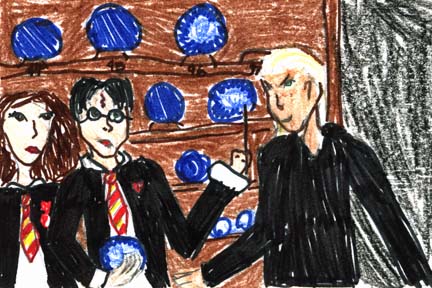 Harry's fifth year at Hogwarts School of Witchcraft and Wizardry wasn't exactly his favorite year! From O.W.L.S. (Ordinary wizarding exam) to dealing with Professor Umbridge, a nasty witch who has taken it to heart to make Harry's life as miserable as possible. This is not fun for Harry! Harry must face Lord Voldemort's Death Eaters in the Department of Mysteries after he escapes from Professor Umbridge. The Death Eaters are followers of Lord Voldemort and do whatever he tells them to do. Harry is trying to get the prophecy so that Voldemort doesn't hear it - or it could be the end of Harry's days.

Hermoine, Harry's friend, reminds me of myself because we both care about our grades and we're both brave. Hermoine is brave by not letting Harry face Voldemort by himself. She insists on going with him on the dangerous venture. That is true bravery and friendship.

This book is very different from other books that I've already read because it combines fantasy with everyday life. In this story Harry is surrounded by fantasy-type characters but the setting is a school - which we all can relate to.

I like books that make me laugh and cry. I laughed when Fred and George, the two troublemakers at Hogwart, they let off fireworks in the school that drove professor Umbridge crazy. It was sad when Harry and his friends were fighting in the Department of Mysteries and Harry's Godfather died. Harry's parents died in the first book when he was born so he was very close to his Godfather.

I have read and have enjoyed all of the books in the Harry Potter series. This book is a little different from the others in that someone close to him dies.

I would recommend this book to anyone who loves adventure, excitement, and surprise. I am in 6th grade so I think that kids who are in 5th through 10th grades may enjoy the Harry Potter series.

Camille R.
is a student in
Mrs. Patterson's Reading Club