Shoeless Joe and Me

Shoeless Joe and Me 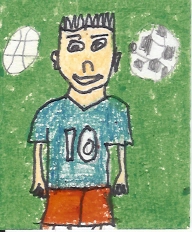 The book I read is called Shoeless Joe & Me. The author?s name is Dan Gutman. The main character Joe Stoshack can travel through time with baseball cards. In this book he uses a 1919 Heinie Groh baseball card to get back to the year 1919.

Yes, I liked the book because I like baseball. I also like Shoeless Joe because he is a very nice guy and always gave his love for the game. I liked the part when Shoeless Joe hit a homerun in the World Series.

Yes, I would recommend it to someone who likes baseball. I?m sure they will like this book. This book deals with historical fiction. They would like the book because it talks about baseball and Shoeless Joe. It?s exciting to learn about the baseball history and the World Series scandal of 1919.