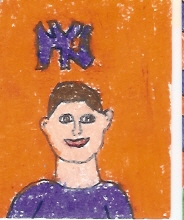 The Great Brain by John D. Fitzgerald is about two brothers, John and Tom Fitzgerald, who live in Adenville, Utah, in the 1900?s. Tom Fitzgerald spends most of his time swindling and taking valuable possessions from other kids in town. He usually learns his lessons by getting punished when he takes advantage of people. Finally, Andy, the kid who lost his leg, the Jensen boys, Basil, the Greek immigrant, and Tom?s friends learn not to mess with Tom-the Great Brain.

I think this is a great book because it relates to me, since I like betting and getting money. There are parts that I didn?t think would turn out the way they did, like when the Greek boy beat up the town bully by wrestling him. I found Tom to be an interesting character because he is a clever boy who always finds ways to get out of trouble! There are other books in this series that are like the original, but Tom is getting older, though still trying to swindle his friends.

I would recommend this book to kids in or above fourth grade. Also, it is best for people who like to read realistic, humorous stories. So read the Great Brain, but hold on to your possessions!