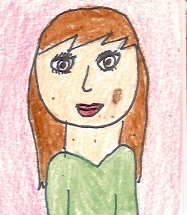 The Spiderwick Chronicles, The Field Guide, by Tony DiTerlizz, is the first in a five book series. It has a lot of fairy tale creatures like fairies, trolls, and even goblins!

This book is about three kids named Jared and Simon who are twins, and their older sister, Mallory. They and their mother moved into an old broken down house where one of their family members once lived but disappeared. In the house Jared found a book called the Field Guide. In it were drawings and facts about fairy tale creatures. Jared heard a noise in the wall, so Mallory broke the wall open. In the wall they found what looked like a house and threw it out.

The next day Mallory woke up with her hair tied to her headboard, and her arms filled with bruises. Soon they found out that a Bogart was responsible. It was one of the fairy tale creatures. Mallory had made it angry somehow. Other strange things happened, but they found out how to deal with them as the plot unfolds.

I think this is a great book about fantasy because it has fairy tale creatures and magic in it. It was magical when the Bogart turned back into what it was before. Jared tried to prove there were magical creatures in the house with flour in the kitchen. In the morning they saw little footprints in the flour. What I also liked about the story were its mysteries about the Spiderwick family. One of the ancestors had disappeared long ago. They found a secret room that helped to explain what happened. They also found a book describing all of the magical creatures. I enjoy reading fantasy!

I recommend this book to people who love fairy tale creatures, fantasy, and mystery. It is a book you?ll enjoy reading.