Behind the Bedroom Wall

Behind the Bedroom Wall

Illustrated by A. Nancy Goldstein 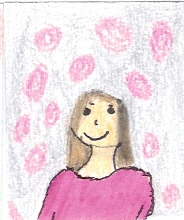 Behind the Bedroom Wall by Laura E. Williams is a great and exciting story that takes place during the Holocaust. The story is about a family living in Germany in 1942. Korinna, a thirteen-year-old girl, who is the family?s only child, believes that Hitler is making Germany a powerful country by getting rid of Jews. But Korinna discovers that her parents are hiding Jews behind her bedroom wall. She has learned from Hitler that whoever helps Jews is a traitor to Germany. Her parents tell her to keep it a secret, but she thinks that she should tell because she feels that she is now a traitor to her country if she doesn?t. Will she tell and prove her loyalty to Hitler, or will she obey her parents? wishes?

I loved this book because I never knew what was going to happen next. I couldn?t put the book down; I had to keep reading. I was a little surprised with the ending, but I still loved it. The book had a lot of sad parts, but some parts were happy. My favorite part was when Korinna discovered the Jews behind her bedroom wall because that?s when I felt like the true story and all the excitement really started. I don?t think this book is like any other book I?ve read about the Holocaust because this book tells it from a different point of view.

I recommend this book to children ages 9-12. Behind the Bedroom Wall from Scholastic is 169 pages of excitement and is perfect for kids interested in history and the Holocaust.