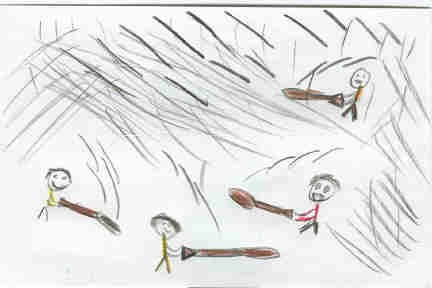 This book is about the four detectives Henry, Benny, Jessie and Violet that go with Maris to redo a trail in the woods, but weird things happen when they sleep. Footsteps are everywhere and there are more mysterious clues to investigate. At the same time, they try to find out who robbed the museum.

I like the way Gertrude Warner makes people think somebody in the story did the crime, but then you think that certain somebody sounds really innocent. In the end, the certain somebody who you thought was innocent did the crime. My favorite part is when Benny was chasing something he saw because there was a lot of suspense and I wanted to know what he was chasing. This book made me think about the teamwork that was used to solve the mystery. Henry, Maris, Benny, Violet and Jessie stayed like friends but also worked hard to survive on Blizzard Mountain as a family.

I recommend this book to kids who like to figure out mysteries on their own. This book might interest people who like the wilderness because throughout the book they fight for survival on Blizzard Mountain.