Please Write in This Book

Please Write in This Book 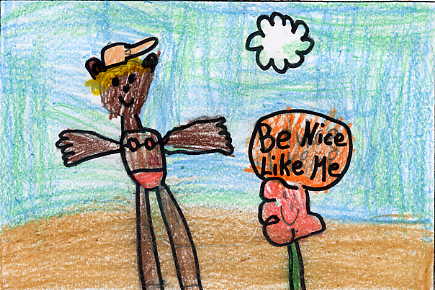 Did you ever see boys in bikinis? Read this book and maybe you will. Kids actually write in this book! The class had a foot experiment, where you smell each other's feet to see how they smell. The teacher put a notebook in the writing center with a note in it asking students to write in the book. It is a really silly book because it has gross stuff in it. It has stuff for boys and girls. Some boys write mean and gross stuff in this book. All of the kids write a book at the end. The teacher gives everybody in the class gold stars at the very end because they worked together to write the story.

I think this book is gross because a boy named Luke said his name rhymes with puke. I liked this book because it was very funny when the boys went in the girls' bathroom. My favorite part was when they wrote a story altogether because they used teamwork. I think Lizzy is like me because she doesn't want people to be mean to her. Luke changed in the story because he was mean in the beginning and nice at the end. There are illustrations in this book; I think they are cool because there are pictures of horses and boys in bikinis. The pictures are black and white. I have never read a book like this, because I have never read a book with puke and horses in it. The book is special because it has stuff for girls and boys.