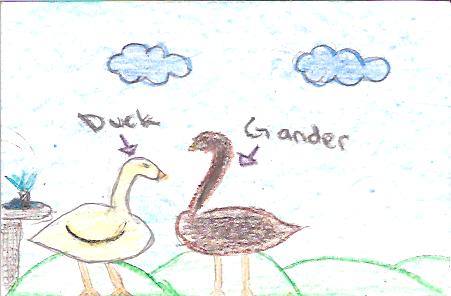 Don't fidget a Feather is a story about duck and gander having competitions. The first competition was to see who could swim the fastest. Duck won! The second competition was about to see who could fly the highest. Gander won! The third competition was to see who could freeze the longest. Who ever won this competition would be the champion of champions. Both freeze but then bees came buzzing, rabbits came hopping, and crows came scratching and plying all around them. But neither one of them move and did not fidget a feather. A gust of wing blew and both of them flew away. Gander landed by a tree and duck landed on a mulberry bush. But neither one of them move. They did not fidget one feather. A fox came by very happy to find good meat for dinner. The fox rolled both of the animals and carry them away to his house. Gander did not move. Duck did not move. They did not fidget one feather. At his house, fox started a pot of water to boil. After making a difficult decision about who to eat first, fox decided that he was going to cook gander first. He was holding Gander above the boiling pot almost ready to drop gander into the boiling water to cook it. Duck was very nervous because gander was not moving. Read the book to find out if gander is going to move and lose the freeze contest, if duck is going to move and lose the freeze contest? Would duck move losing the contest but saving his friend? Read the story to find out what happens at the end.

My favorite part is when duck says "winning is not important a friend is forever." This book reminds me of the book titled Scooby-Doo because of Shaggy and Scooby. They always have competitions about eating food. Sometimes Velma tries to find more clues to win the competition. This book even reminds me about human competitions in games and sports.

Amber A.
is a student in
Mrs. Flores' 4th Grade Class