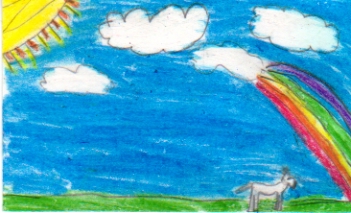 When Mary-Kate and Ashley were going to their friend Lindsey's house, they went to the store for some food to eat. In the store they were talking about unicorns. The man in the store said that you could only see unicorns if there were three rainbows in June. Everyone was talking about it. Mary-Kate and Ashley wondered if a unicorn was real? The cashier gave them a poem. It saidhow to capture a unicorn. When they got to Lindsey's house, they got out of the car. They heard a scream. It was Lindsey. Her beautiful red tulips were gone. That night Mary-Kate heard something in the flower bed. She woke-up Ashley and Lindsey. They raced down stairs. What was it? Lindsey's sister, Abby came in the kitchen. Her feet were covered with mud. "What were you doing in the flower bed?" they asked. "I was taking a picture of what was in the bed." The next day they went to Lindsey's friend's house, They asked her if she cut Lindsey's tulips. She said that she did not. Then they went to Nick's house. They found a flower clipper. Who did it? Was it Abby, Nick, Carly, or the unicorn? To find out read the book, "Mary-Kate and Ashley and The Unicorn Mystery."

I found Nick interesting because he wanted to put everything on his news. He was always excited about things-just like me. When he found something to put on his Nick's News he would jump up and down. When I get a good idea, I jump up and down too.

The thing that is unique in this story is the mystery. How many mysteries have a unicorn in it? This is the only book that I've read that was about a unicorn.

This book is like some books I have read. I have read many mysteries, but this is my favorite. They were all The New Adventures of Mary-Kate and Ashley and are my favorites.

I would recommend this book to about 3rd to 5th graders. I really like Mary-Kate and Ashley and I think you will too.