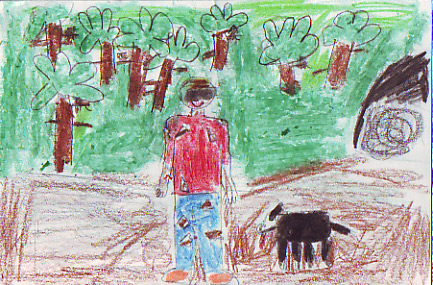 "I disappeared on the night before my 12th birthday, July 28, 1988." No one knew what happened to Michael when he was lost at sea. He was thrown overboard while sailing around the world with his Mom, Dad and dog, Stella. Thinking he was alone on the island he had washed up on, he soon found out there was someone else helping him. From the food to the water, he began to wonder who was feeding him. They both enter each other's unknown world and grow respect for one another while waiting for rescue.

This book is full of suspense with its never-ending adventures. While trying to survive Michael must protect himself during the storms on the island. In my opinion, this book has enough detail for you to picture it in your head. When they introduced Kensuke you could visualize his exact appearance in your mind as he acted throughout the story. At points in this book you will be on the edge of your seat. You will be wondering deeply if Michael is going to survive. As the author uses great suspense you will feel adrenaline rushing through you. This book is a page turner that will keep you reading for hours. It is similar to Storm Breaker by Anthony Horowitz because you won't want to stop reading it.

I recommend this book to readers because it helps people understand how things can happen in the wild. It tells about some real places in the world. It also shows you how adventurous it can be to travel the world by boat. I recommend this book to a little more advanced readers because of its large variety of vocabulary and because some descriptions may get confusing at times. People who enjoy survival stories with a great deal of suspense will probably enjoy this book.