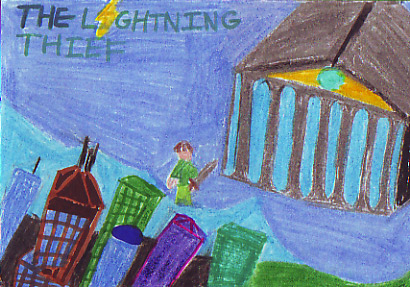 Can you imagine having a beastly monster for a math teacher and a history teacher who is a half-horse, half-human creature? Well, Percy Jackson is an unlucky boy who finds out that he is a half-blood, born between an immortal god and a mortal human. He is threatened by monsters and goes to the Half-blood Hill Camp, where all half-bloods are safely living and trained. But then, Zeus' lightning bolt is missing, and he blames Percy for stealing it. He, a son of Poseidon, Annabeth, a daughter of Athena, and Grover, a satyr, goes on a quest to retrieve the missing lightning bolt, which holds the fate of the world. Will Percy survive the quest and save the world from World War III, or will he fail to stop the dangerous war? The Lightning Thief is very intriguing to me, and very fascinating. It was all about Greek mythology and I enjoy anything that has to do with mythology. My favorite part was when Percy fell from the St. Louis Arch down to the Mississippi River and survived. It was amazing that his body didn't get shattered into hundreds of pieces. Grover, the satyr, was my favorite character because it was very funny to picture him living in the real world, and he was the joker in this story. Luke, Percy's friend, has become evil because the wanted to give the Olympian gods the wrath of his anger, that's why he attacked Percy after he came back from his quest. I really enjoyed The Lightning Thief and I recommend it to readers who like fantasy and myths. I also recommend the book to anyone who likes action and medieval weapons, like swords and shields.