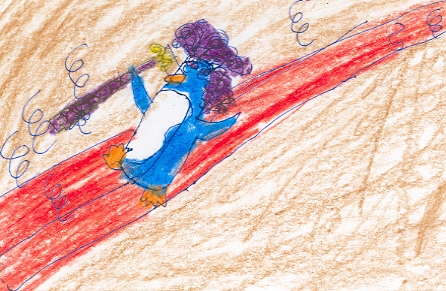 Once there was an emperor penguin who liked putting new clothes on every day. But then, one day, he didn't have new clothes. Two scoundrels pretending to be weavers come into town and tell everybody that they have magic thread to make magic clothes and anyone who can't see the clothes are either simpleminded or untrustworthy. So, the emperor penguin gives them silk, but they keep that for themselves, for money, and PRETEND to weave. Then, the emperor's officials and advisors check the clothes, and they don't see anything but they don't want anyone to think they're simpleminded or untrustworthy, so they pretend to see the clothes. And when the emperor came, he didn't see the clothes either, but he didn't want anyone to believe he was stupid or dishonest either, so then he pretended too. And so did the people around him--they didn't want anyone to think they were dishonest or stupid. So the emperor made a parade to show everybody his beautiful clothes. And he marched naked in his pretend clothes! If you want to find out what happened to the emperor, then read the book, "The Emperor Penguin's New Clothes."

I liked this book because it was so silly. How could the penguin not know he wasn't wearing any clothes? And the townspeople were afraid to say anything. I think the book would be better if there were more characters involved--like if the emperor penguin's brother knew the clothes were fake, and he told everyone and then everyone could get angry at the scoundrels and run them out of town. Then the emperor penguin could thank his brother; then he could make a parade for himself, and his brother, and his own clothes and his brother's clothes. I think the illustrations were beautiful. I think the artist has a good imagination and a good way of thinking, like me. The colors are beautiful. This book is a really good book and I think it is a one of a kind. I learned, a scoundrel means a person who tricks people, that simple-minded means stupid and that you can't believe a person who is untrustworthy. The moral of this story is: if you think you're the only one that thinks something, you should speak up because probably, other people think the same thing too. Don't be afraid to say what you think. You never know. Someone else might think the same thing.

I think people who like penguins and silly things will like this book because it was the silliest book I ever read. Also, I think that people who want to see things that are really imaginative and have really cool designs and pictures and a good sense of style should read this book. And people who like tricking people will like reading about the scoundrels. People who want to read non-fiction won't like this book. I think you should be at least seven years old to read this book, and if you don't know what the words mean, ask your parents or go to a dictionary.

I think this book was as good as a book named, "There's a Wocket in My Pocket" by Dr. Seuss. My favorite book is "Yu-Gi-Oh: Monster Duel, The Official Handbook," which it explains Yu-Gi's life and past life?it shows you things about cars, what they do and their special abilities and what they look like. It also shows peoples' personalities and what they do. Both books, Yu-Gi-Oh and The Emperor Penguin's New Clothes are both made-up. For example, Yu-Gi-Oh is about duel monsters and a hologram projector called a duel-disc. I think in the future, they might create a real one. The Emperor Penguin's New clothes shows something that could happen in the real world--a person could trick a person into doing something silly. That could happen. Yu-Gi-Oh is about machines. The Emperor Penguin's New Clothes is about the way people act. It is a fable because it shows a lesson.

Sobel U.
is a student in
New York Cares/Island School Reading Club