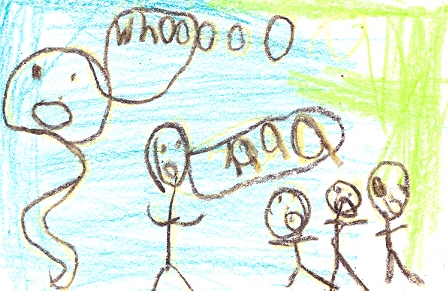 The camp scouts didn?t want Papa going on the next trip. So Papa scared them and told them that there was going to be a parade of spooks. Then when they left, Papa made a sheet with three holes that looked like a ghost. The scouts were already at the woods. Then the scouts told leader Jane that Papa scared them by telling them that there was a parade of spooks. They fixed up camp. Then leader Jane went for a walk and saw? PAPA BEAR. And she said that two bears can play that. So she took twigs and leaves, and made something that looked like a FACE. Then the camp scouts heard a mysterious sound that went? WHOOOOOOOOOOO. Then they didn?t notice but is was Papa Bear. The scouts got scared like nothing before. Then they heard? THE SAME MYSTERIOUS SOUND BUT LOUDER! It was leader Jane. They got scared because the sound was even louder. So they went to leader Jane?s tent, but she wasn?t in there. So Sister Bear said, ?W-What shall we do?? And then that?s when they heard spook number three, who said ?WHOOOOOOOOOOOOO?. The scouts were as frightened as two skies falling on them, because it was so loud. Then they knew that it was Mama Bear because she always wears a blue-polka dotted dress. Then Mama said, ?I couldn?t miss this prank on Papa Bear.?

I feel that the book would be scary for kids younger than three years old. Maybe kids who like to trick people will like this book. They can get ideas for tricks from this book. I didn?t like the part where everybody tries to be a ghost. But I liked the part when Mama tricked everybody else.

My best friend Ruben would like this book because he likes ghosts, I think. This book is good for kids three years old and older because they don?t get scared easily. And my little cousin will like this book. This review is dedicated to my father and my cousin, Star, because they are both tricky.