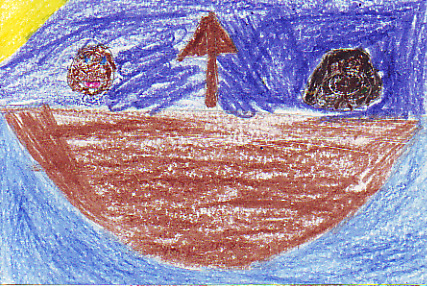 "Dog overboard! Get him Enoch, please! He doesn't have a life jacket" said Tom. The dog's name is Thunder because he was found during a thunderstorm. Tom is an orphan, who is not officially adopted, but the Murray's are thinking about it. They become attached to Thunder and want to adopt him too. Thunder is an amazing dog, even to the extent of saving people. Now trouble is coming! Can Thunder save this family?

This book is a spectacular book because it was suspenseful. My favorite part is when Tom and Thunder meet each other. I liked it because I could see they were going to be friends. Thunder from the Sea is similar to Because of Winn-Dixie because they are both about a child and a dog who become friends. I felt happy, sad and scared during the whole book, but especially when the flood occurred and Amos threatened to kill Thunder. This part was so suspenseful and scary.

I recommend this book for 4th through 7th graders because there are some difficult words and is smaller print for young readers.