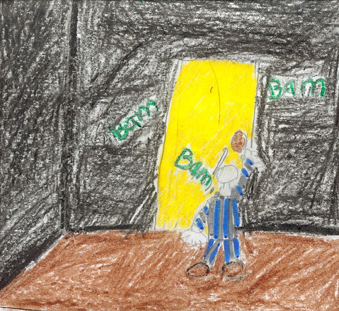 This story is about a boy named Andrew. He couldn?t sleep because it was noisy outside and in the house. People knocked in the door but he couldn?t reach the door knob. When his dad came home he opened the door and people came inside. They had a tea party. In the party someone?s mom broke the tea cup and Andrews dad made some tea and put it in the cup. One lady drank the tea too fast. Andrew?s house was messy and he got angry. He began to sing rock-a-bye giant and a lot of people fell asleep. Even Andrew fell asleep. Then the people began to leave.

I think this story is great because it reminds me of something like when I would sleep. People would come and keep me up. One time I wanted to surprise my uncle and I gave him a tea cup. He thought we should have a tea party. I didn?t want to wake my brother. My little brother saw me and woke up and started following me. He started to come to the kitchen and he broke the tea cup. I got mad at my brother because he broke my tea cup and now me and my uncle couldn?t have a tea party. My uncle said: ?next time when you fix the tea cup call me and I might come?. I remember that.

I recommend that people read this book because it might bring back some memories and those are fun. It also might help you find ways to sleep better when there is too much noise around.