Jigsaw Jones: The Case of the Glow-in-the-Dark Ghost

Jigsaw Jones: The Case of the Glow-in-the-Dark Ghost 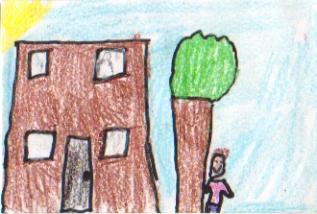 Come on! Do you want to hear about a glow-in-the-dark ghost? Jigsaw was a detective. One Tuesday night one of Jigsaw's friends saw a ghost in their school. The next morning Jigsaw woke up early for school. Jigsaw ate some of his favorite cereal, Captain Crunch. When he got to school, there was a footprint in his room. Jigsaw had a plan. On Tuesday night, his brother would take him to school to solve a mystery. When Jigsaw and his brother went to school, they saw the ghost. It was dancing around in Jigsaw's room. Jigsaw got out of the car and went by the school. The ghost was coming out. Jigsaw looked at the ghost. Read the book to find out who the ghost was and what it was doing in school.

I think this was a good book because the kids thought there was a ghost in school. They were afraid of the ghost. I like to read about scary things. My favorite part was when Jigsaw said he was not afraid and he was going to find out about the ghost. I like it because Jigsaw was brave and was going to help the kids not to be scared.

I felt scared when Jigsaw went to school. I was afraid the ghost would get him.

This book reminded me of when I was little. I thought that there were ghosts in my closet and maybe downstairs. Just like Jigsaw, I am not afraid of ghosts anymore.

I recommend this book for second graders and up. It would not be too scary for them.