A Ghost In The Family

A Ghost In The Family 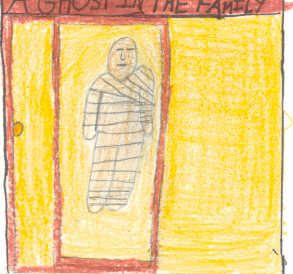 When they got to the house, Chad thought it was really big. So when they got in, he met his neighbors that rent rooms from Aunt Rosebud. He met Madame Keppelle and she tells fortunes and she told Chad, ?I see trouble all around you.? One day, when they went to a museum and they saw mummies, snakes, and beetles, then they met Mrs. Palmer and her son David. Mrs. Palmer told Chad and Jeannie about the time she didn?t have any money so she wanted to sell her diamond bracelet, but it got stolen. She put it in David?s room, where she thought no one could see it, because his room was messy.

Next, Chad met Mr. Callahan and he looked very shy. He also went to jail once. One day, Jeannie and Chad and Mrs. Palmer went to the grocery and saw Mr. Callahan. He looked guilty, so Chad sneaked into Mr. Callahan?s room that night and could see David?s room through the window, just like he could see through his own window! Aunt Rosebud told Chad that Dr. Dempsey used to live in his room, before he was killed. He was a dentist, who wanted money. So Chad thinks Dr. Dempsey or Mr. Callahan could have stolen the diamond bracelet. Chad also thinks his own room is being haunted by the ghost of Dr. Dempsey! The mystery continues? Read the book to discover how the mystery is solved at the end of the story!

My favorite part was when Chad solved the mystery of who stole the diamond bracelet, because then the story got happier. My least favorite part was when Chad thought Mr. Callahan was another person who could have stolen the bracelet because I didn?t want anybody else that lived there to be like Dr. Dempsey? because he was haunting Chad! I did like this book, because it made me think about who could have stolen the diamond bracelet, and there was a scary beginning, a mysterious middle, and a happy end!

Karen Z.
is a student in
Page Turners After School Program / Rauschenbusch Center